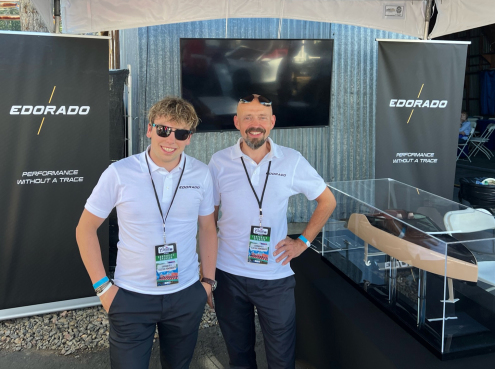 The South Lake Tahoe branch of El Dorado County Public Libraries invited Scott Ruck to give a presentation on "Electric Sportboats for Lake Tahoe" on 18 June, 2019.  A wonderful evening with a very involved and interested audience!

Special thanks to Denise Haerr of the South Lake Tahoe Library for orgainizing the event, her husband Steve for his help, and all of the attendees!

Below are photos of FLAIR under construction and LGM motor system inspection: 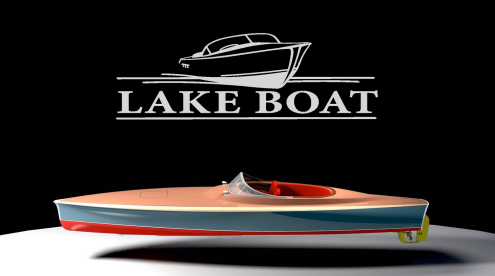 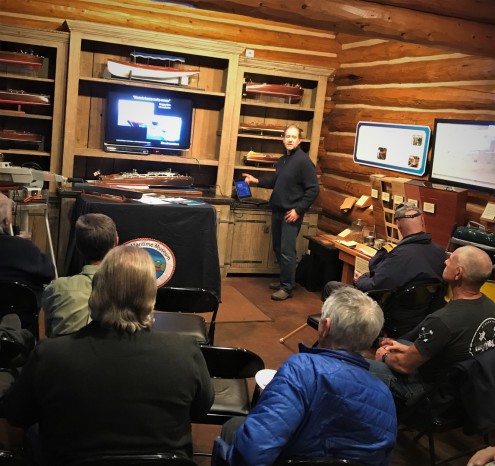 LGM is a subsidiary of LEO Motors and is a company to watch in the development of electric sporboats.

The SAY 29E is available from SAY Carbon Yachts based in Wangen im Allgau, Germany. The boat is powered by an advanced electric propulsion system from Kresel Electric in Austria.

Contact Ruckmarine for information on this breakthrough electric sportboat!

Two of the highlights for Ruckmarine at boot Düsseldorf:  Ortner Electric (Austria) and their "no compromise" Electric Nautique models;  and the SAY Yachts (Germany) SAY 29 Carbon Runabout with Kreisel electric drivetrain.

For photos and videos of "e-motion" on Lake Tahoe following the Concours d'Elegance show, go to:

Ruckmarine, in partnership with Designboats and Torqeedo, displayed the Tender 06Oe "e-motion" at the Concours d'Elegance Boat Show on Lake Tahoe, August 11-12, 2017.

Following the boat show, "e-motion" wwas available for demonstration rides out of Homewood Marina from August 14-20.

Delivered May 2017.  Another brand new boat based in Sausalito, CA.  This Designboats Tender 06e was built by Bootswerft Heinrich AG in Kreuzlingen, Switzerland, and outfitted with the Torqeedo Deep Blue 80 at Keefe-Kaplan Maritime Inc. (KKMI) in Richmond, CA. 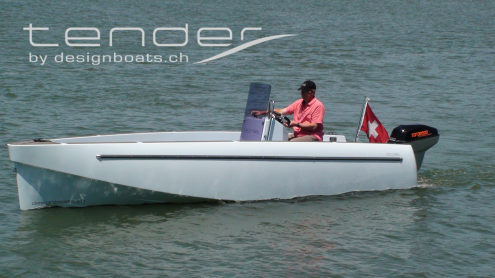 Delivered September 2016.  Brand new boat, based in Sausalito, CA and used for casual cruising in Richardson Bay.  Four Torqeedo Power 26-104 Intelligent Lithium Batteries are installed underneath the bench seat.  Charging is through a portable charger box.

Ruckmarine worked with Symphony Boat Company and the introduction of their new Allegro Electric Sportboat model at the Ft. Lauderdale Boat Show in November 2015. The Allegro is powered by the Torqeedo Deep Blue 80 HP inboard system and is another potential electric sportboat ideal for Lake Tahoe.

Ruckmarine participated in Summer Sailstice 2015 at the Encinal Yacht Club in Alameda, CA.  The SCARIB Solar-Electric Dinghy was on display, and it was great to support this sailing event and join in the fun!

The Strictly Sail Pacific Boat Show in April 2015 was a great time!  Torqeedo and Ruckmarine had two boats in the water for customer test drives:  the SCARIB Solar-Electric Yacht Tender with a Travel 1003 and PowerFilm solar panel;  and another inflatable with a Cruise 2.0 and Power 26-104 Intelligent Lithium Battery.  Both were busy throughout the show.

Ruckmarine and Kymera Body Boards joined forces at the Sacramento Boat Show in March 2015, displaying the only "drought resistant" boats at the show!  Ruckmarine's SCARIB Solar-Electric Dinghy and Kymera's Electric Jet Body Board can be easily carried to the water, launched, and enjoyed, even with low water levels! 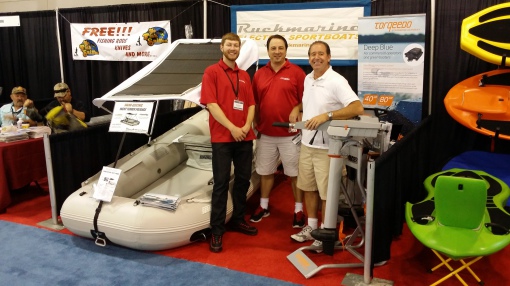 Ruckmarine visited the Düsseldorf Boat Show in January 2015 to check out the many advanced electric sportboats available in Europe today!

Ruckmarine and Torqeedo at the San Francisco Boat Show in January 2015. 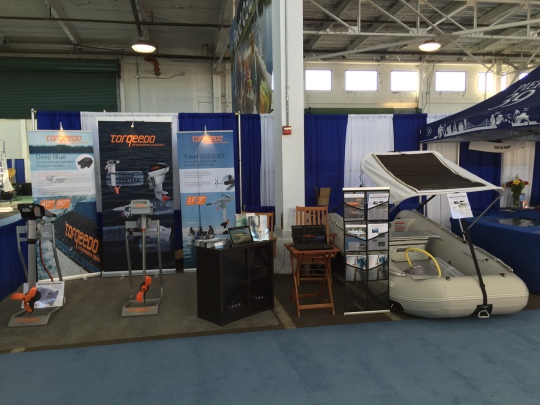 The start was just off the launch ramp at Cave Rock, Nevada, and the finish was outside Obexer's Boat Company in Homewood, California.  Total distance is 11.3 miles.  Ruckmarine's time was 65 min. 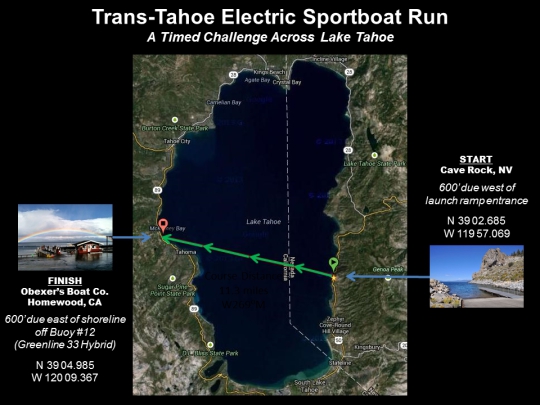 The KONA 17 was on display and giving rides at a luxury lakefont home on Lake Tahoe as part of Sierra Sotheby's International Realty Tahoe Lifestyle Open House Tour on Saturday, August 16, 2014. 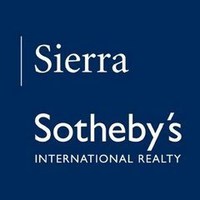 Old meets new, as visitors to the 2014 Lake Tahoe Concours d'Elegance demo the KONA 17 Electric Sportboat and Greenline 33 Hybrid Yacht.  Ruckmarine's KONA 17 was also used to give City Yachts' clients a ride from the show out to the Greenline on its mooring buoy at Obexer's Boat Company. This was the Tahoe Yacht Club Foundation's 42nd annual Lake Tahoe Concours d'Elegance classic wooden boat show.

Ruckmarine and City Yachts showed support for the League to Save Lake Tahoe at their recent fashion show fundraiser with a clean electric boat "Cruise By." Ruckmarine launched the KONA 17 while City Yachts brought the Greenline 33 up to Incline Village, and both boats cruised by the venue demonstrating how boating on Lake Tahoe can be fun and clean at the same time!

The video below was taken in front of the venue, where Ruckmarine and City Yachts were showing their support for Keep Tahoe Blue by demonstrating clean, electric boating! 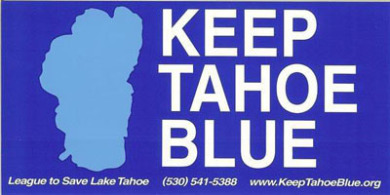 Torqeedo was an official sponsor of this year's Tesla Motors Club (TMC) annual conference and exposition, "TMC Connect!"  TMC Connect ran the weekend of July 18-20, 2014, at the Hyatt Regency in Monterey, California.  The KONA 17 and SCARIB Solar-Electric Yacht Tender were on display.

Scott Ruck gave a presentation about developments in electric boating to the local (East San Francisco Bay) chapter of the Electric Auto Association on Saturday, June 28.  The meeting was held at the Rhythmix Cultural Works in Alameda.  The KONA 17 Electric Sportboat, KONA 15 Electric PowerSkiff, and Torqeedo Travel 1003 were on display. 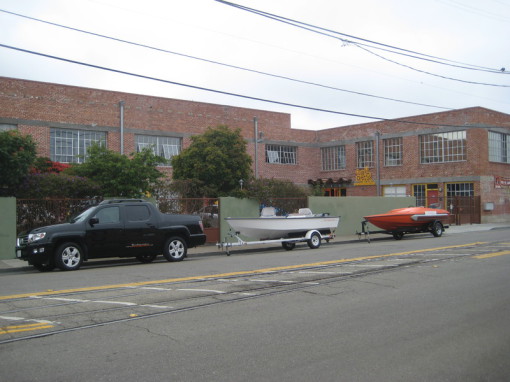 Ruckmarine joined up again with City Yachts and their beautiful Greenline Solar Hybrid yacht for a display of electric boats combined with a Tesla Model S test drive at the Corinthian Yacht Club on Saturday, June 7, 2014.  The Torqeedo-powered KONA 17 was out front with the Tesla cars, while the Greenline 33 was at the dock along with its very own SCARIB Solar-Electric Yacht Tender launched!  Members were able to take the SCARIB Sloar-Electric Yacht Tender out for test drives.

The boats were berthed at the Sierra Boat Company in Carnelian Bay, nearby the Gar Woods restaurant, and made runs to Tahoe City and the Tahoe Yacht Club.

The folks at the Sierra Boat Company were outstanding hosts for the weekend!

We ran the boats for the entire weekend, put nothing into one of the most beautiful lakes in the world, and demonstrated how much fun clean boating can be.  This is the ultimate way to "Keep Tahoe Blue!" 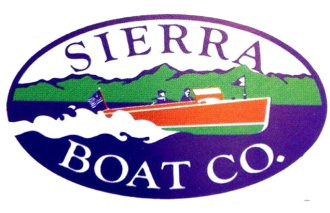 The 2014 Newport Beach Boat Show was held at the Lido Marina Village April 3-6, and the KONA 17 Electric Sportboat with Torqeedo Deep Blue 40 was right at the entrance! The Apex Qwest pontoon boat with Deep Blue 80 was at the docks and cruised around Newport Harbor.

Ruckmarine joined City Yachts/Greenline and Tesla Motors for another Tesla Model S test drive event, with a variety of electric and hybrid boats on display at the Tiburon Yacht Club in Paradise Cay Marina, Tiburon.

Ruckmarine had the KONA 17 Electric Sportboat, KONA 15 Electric PowerSkiff, and SCARIB Solar-Electric Sport Runabout on display at the 2014 Sacramento Boat Show, along with the Torqeedo Travel, Cruise, and Deep Blue electric outboard motors!

The KONA 17 was a Featured Product at the show!

Ruckmarine and City Yachts/Greenline teamed up for another event, combining a Tesla Model S test drive with an in-water display of the most advanced electric and hybrid boats.  Westpoint Harbor was a perfect venue and the management and residents were all wonderful, making for a great day.

City Yachts had the beautiful Greenline Hybrid 33 yacht at the dock, while Ruckmarine got a lot of attention with the Torqeedo-powered KONA 17 Electric Sport RIB and SCARIB Solar-Electric Sport Runabout.  Visitors were able to take the SCARIB out for a spin!

The Oakland Yacht Club hosted a Tesla Test Drive and invited Ruckmarine to display the KONA 17 Electric Sportboat and SCARIB Solar-Electric Tender.  The Greenline 33 diesel-electric hybrid was also on display.